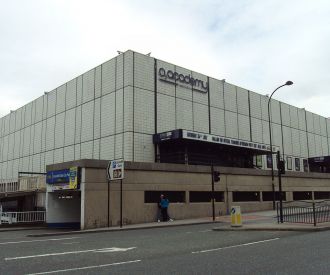 Located in the centre of the bustling city of Sheffield, which boasts a virbant music scene and is home to the iconic Arctic Monkeys, the O2 Academy Sheffield welcomes some of the biggest touring bands, artists as well as hosting smaller, up-coming artists and small scale events. For example, the O2 Academy Sheffield has hosted the likes of Reverend and the Makers, Ellie Goulding, Rita Ora, James Arthur, the Cribs, Dead Kennedys and the Wailers, Jake Bugg and many more. Although there are no regular club nights at the O2 Academy, they do host one-off clubbing events, such as Gatecrasher, Valve Soundsystem and Detonate. The venue is also used for events such as Bongos Bingo, a Bingo night with a twist.

Previously the building of the Roxy Nightclub and then known as the Carling Academy Sheffield, the O2 Academy Sheffield is currently owned by the Academy Music Group and sponsored by Telefonica Europe, who are the owners of the O2 Network in the UK. Following the O2’s purchase of the Millennium Dome, other venues across the UK were also rebranded as the “O2 Academy” in a deal with music promoter Live Nation.

The O2 Academy Sheffield is a small, intimate venue with a capacity of 2,350 in the main room, as well as a 500 seating capacity in the secondary smaller room, which sometimes hosts smaller events and bands to showcase new talent.

The larger auditorium is an all standing venue, both downstairs and upstairs, so seats can not be booked in advance.

For general enquiries, please call Call +44 (0)114 253 7782, which is open from 12pm to 4pm, Monday to Friday, or alternatively email sheffieldboxoffice@o2academysheffield.co.uk.

Ticketmaster is the official booking partner for all Academy Music Group venues in the UK, so please book online or call them on 0844 477 2000. It is also possible to book in person at the Sheffield O2 Academy Box Office.

Train: Sheffield train station is extremely close to the venue - it is less than 800 metres away! The station has services from the East Coast, East Midlands, Cross Country, Northern Rail and TransPennine Express which have both local and national services.

Bus: there are many bus routes which run across Sheffield and South Yorkshire, stopping close to the Sheffield O2 Academy. Please see the website for full details.

Tram: the closest Supertram stop to the O2 Academy Sheffield is Castle Square, where all three lines stop.

If you have any access enquiries or need to make bookings prior to your visit, please call the O2 Academy Sheffield Access line on +44 (0)114 253 7782. You can call this number for advice on personal assistants and access requirements. You are eligible for one companion ticket, free of charge, who can support you throughout the visit - please call the access line for full details on this. However, please be aware that you will have to prove your eligibility for this ticket.

If you are taking the car, the closest NCP car park is right next to the venue at Arundel Gate, Pond Street, Sheffield. Alternatively, public transport options, such as the train, generally have step free access, ramps, low levels counters, lifts and staff support. However, please see the National Rail website for more information on this. Most of the buses in South Yorkshire are also low-floor and fully accessible, but if you need more details please visit the official Travel South Yorkshire website.

There are wheelchair spaces, however we recommend that you book in advance as they are available on a first come first served basis. There is also a viewing area which is available but only for you and your companion.

Dogs and assistance dogs are welcome in the O2 Academy Sheffield. Your dog can stay with you throughout the show, or it can be arranged that your dog is looked after throughout the duration of the performance. Please call beforehand if you wish for your dog to be looked after.

Age restrictions vary depending on the event, however there are a few general rules: