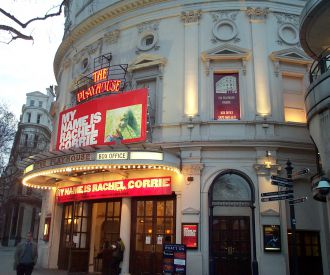 Located adjacent to Embankment and overlooking the Thames, the Playhouse Theatre is a West End theatre known for hosting a variety of high-profile plays and musicals which often star celebrities. For example, the Playhouse Theatre has welcomed the likes of Lindsey Lohan, Harvey Fierstein, Mathew Perry, James Macavoy, Emeilia Clarke, Ian Richardson and many more. While the Playhouse Theatre is known for welcoming the returning production of 1984, it has also become the home of the Jamie Lloyd Company’s 2019-2020 season and hosted plays such as Cyrano de Bergerac, The Seagull and A Doll’s House. Other musicals and plays include An Inspector Calls, the Kite Runner, The Rocky Horror Show, Dreamboats and Petticoats, My Name is Rachel Corrie, Footloose, Caroline, Or Change, the Fiddler on the Roof and Good.

With an auditorium built in a traditional Franco- Venetian style, the Playhouse Theatre boasts an exquisite interior and has retained many of its original features. Although the Playhouse is not one of the largest theatres in the West End, it welcomes an extremely high calibre of theatre and many groundbreaking. Located close to many shops, restaurants and attractions on the bank of the river Thames, you could really enjoy a day out of it when visiting the theatre. The Playhouse Theatre is currently owned by the Ambassador Theatre group (ATG) which managed over 50 theatre venues across the world.

With a capacity of 780 seats, the Playhouse Theatre has a medium sized auditorium which does have some seating with restricted viewing. The theatre is divided across three levels: the Stalls, the Dress Circle and the Upper Circle. Ticket prices vary greatly depending on where you decide to sit in the auditorium.

The Stalls: as the largest section of the Playhouse theatre, the Stalls has a capacity of 360 seats and some of the best seats in the house. These can be found in the centre of the Stalls, where you can enjoy excellent views of the stage.

*Calls cost 7p per minute, as well as your phone company's access charge.

Train: Charing Cross Station is only a 5 minute walk away from the Playhouse Theatre and it has many national rail services.

Car: the Playhouse Theatre is part of Q-Park’s Theatreland discounted parking scheme which means that you can enjoy 50% off your parking ticket. The closest car parks to the Playhouse Theatre are Trafalgar Square and Chinatown which are between a 10 and 15 minute walk away from the theatre. This will cost £22 for up to 3 hours and £29.50 for 4 hours before the discount is applied.

Situated on Northumberland Avenue, the Playhouse Theatre is 3 steps up from street level and through some double doors. There is also a temporary ramp available for wheelchair users.

The most accessible area of the theatre is the Stalls, which are step-free from the foyer to seating. There are two wheelchair spaces Row G and J and rooms for companions on either side. There are also 6 transfers available into the aisle seats. Wheelchair users are advised to bring a companion to help them.

If you require any customer assistance, staff are there to help customers navigate the theatre and also provide an at-seat service.

Opening its doors in 1882, the Playhouse Theatre was originally named the Royal Avenue Theatre and was built by F.H Fowler and Hill. Undergoing extensive refurbishment in 1905, it reopened as the Playhouse Theatre in 107 which has been ever since. Through the early 1990s a range of plays and in 1951, it was taken over by the BBC as a recording studio for live performances.

From 1987, it was restored as a theatre and opened with the show Girlfriends and has been a commercial building ever since. From 2013, it has been owned by the Ambassador Theatre Group and continues to host a range of live entertainment.