Warning: Invalid argument supplied for foreach() in /furanet/sites/best-tickets.co.uk/web/htdocs/app/_i18n.php on line 287
 Apollo Theatre, London | Seating plan, box office, address
Find the best price on Best-tickets.co.uk
Compare prices between 40 official ticket vendors and five resale platforms (where prices may be higher or lower than the price on the ticket). 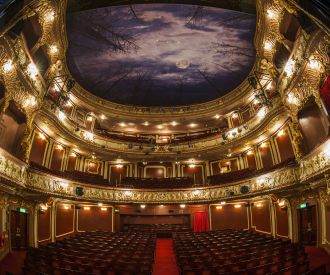 Located in the heart of London’s theatreland, The Apollo theatre has been running sell-out plays and musical theatre productions for over a century. Home to the multi-awarding winning musical Everybody’s Talking about Jamie and the popular children’s play Horrible Histories: Barmy Britain Part Four, the Apollo theatre attracts hundreds of theatregoers per day.

As one of the West End’s smaller yet more intimate venues, The Apollo theatre capacity is 775 seats and is divided into the Stalls, the Dress Circle and the Grand Circle.

Given that the auditorium is fairly small, you can still enjoy excellent views of the stage at discounted prices. These seats can be found in the Grand Circle, the section of the theatre furthest from the stage, and also the curved rows in the Dress Circle which have slightly restricted viewing but heavily discounted tickets. You can also purchase on the day seats for £20 which are in row A of the Stalls - you may have to crane your neck whilst looking at the stage!

The Apollo Theatre Box Office is open Monday to Saturday 10am – 8pm. For Sunday performances, the Box Office will open from 10am until the start of the final performance of the day.

The Apollo theatre can be accessed easily by public transport and also be car. However, please note that it is within the London Congestion Zone and you will be charged if you choose to drive. Public transport could therefore be an easier option. The Apollo Theatre full address is:

Train: the closest train station is Charing Cross rail station which is a 10 minute walk away. When you leave the station, take a left and then walk straight up Charing Cross Road which eventually crosses over with Shaftesbury Avenue. Take a left onto the avenue and then you will find the theatre.

Car: the Apollo Theatre is part of the Q-Park Scheme which saves you 50% on your parking ticket. The nearest car park which operates in this scheme is Q Park Chinatown Car Park. Alternatively, you can park in the nearest car park on Brewer Street (W1F 0LA).

If you have any questions about access to the Apollo theatre, please call the access line prior to your visit 0330 333 4815 or email access@nimaxtheatres.com. If you require wheelchair access, please contact the theatre beforehand so that they can help you throughout your visit.

If you are a wheelchair user, then the most accessible place in the theatre is the Stalls. There is a wheelchair lift which has a platform and will take you to the Stalls. Without the lift, the Stalls are 22 steps down and 12 stairs to the Dress Circle. The maximum weight of the platform is 300kg. Stalls Q1 nad Q22 can be removed so that there is wheelchair spaces. Upon arrival, please let a member of staff know if you require the lift and/or spaces and they will happily assist you.

The Apollo theatre has fully adapted Ladies and Gentlemen’s toilets in all sections of the theatre.

The Apollo theatre has bars located in the Stalls, Grand Circle and Balcony sections of the theatre. If you are an access customer and require assistance please tell a member of staff and they will provide seat service.

There is a Williams Sound hearing assistance system fitted in the theatre and headsets can be loaned on a first come first served basis.

Guide dogs are welcome in the theatre or alternatively staff are happy to look after them throughout the performance.

Opening its doors on the 21st February 1901, the first ever show to appear the Apollo theatre was the American musical comedy The Belle of Bohemia. It then became known for hosting musical comedies throughout the early 1900s and established itself as a successful theatre during its four-year run of Follies.

It then continued to host a range of shows up until the end of the First World War. It saw a successful run of productions in the 1920s and particularly the 1928 production of R.C. Sherriff's The Journey's End, which starred Laurence Olivier. Traditionally, the Apollo theatre is known for staging plays as opposed to musical theatre and to an extent this tradition has continued. The 2013 incident of the balcony falling down during the production of the Curious Incident of the Dog in the Night-Time led to its closure until March 2014 and was all over the news. However, this did not stop theatre goers The newly renovated Apollo theatre has continued to host sell-out productions.

The Apollo Theatre Everyone is Talking About Jamie