Warning: Invalid argument supplied for foreach() in /furanet/sites/best-tickets.co.uk/web/htdocs/app/_i18n.php on line 287
 O2 Academy Birmingham, Birmingham | Seating plan, box office, address
Find the best price on Best-tickets.co.uk
Compare prices between 40 official ticket vendors and five resale platforms (where prices may be higher or lower than the price on the ticket). 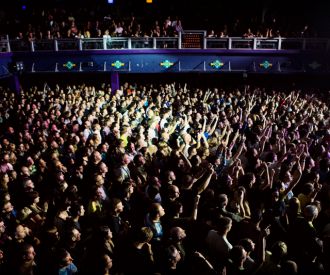 The O2 Academy Birmingham is a relatively large space and is divided into three performance areas: the Main room, Academy 2 and Academy 3. While the main room is the space which is primarily used for larger concerts and other forms of entertainment, the O2 Academy Birmingham also hosts smaller shows in the other rooms and gives new talent the opportunity to showcase their talent in fully equipped environments.

The Academy: as the main room in the O2 Academy Birmingham, this room is known as the Academy and has a total capacity of 3,009 seats, of which 2,409 is standing room in the stalls. There is also space for seating in the tiered-seated balcony which has a capacity of 600.

Academy 2: this is a much smaller room which caters for audiences of up to 600 people. There is only standing area in this section of the complex.

Academy 3: this section of the complex is extremely intimate and only has a capacity and is the smallest of the three stages.

The O2 Academy Birmingham access line is +44 (0)121 622 8250 or you can email disabledbookings@o2academybirmingham.co.uk

12 noon to 4pm, Monday-Saturday. However, some of these times vary on bank holidays.

Train: the O2 Academy Birmingham is only a 10 minute walk from Birmingham New Street Station, the biggest train station in Birmingham which has several services from most major UK cities.

Metro: there is a Midland Metro which runs frequently between Wolverhampton and Birmingham 7 days a week.

National Express Coach Station: there are several coach services which stop at Digbeth Coach Station which is then only a 10 minute walk to the O2 Academy Birmingham.

Car: with regards to the O2 Academy Birmingham parking, the venue does not have it’s own parking facilities, however you can park in local streets or in the Mailbox car park, which is only 600 metres away. This car park has 16 accessible spaces and the NCP Car park in Horsefair is only a few metres away with a few spaces.

To book any access requirements or personal assistants, please call the O2 Academy access line on +44 (0)121 622 8250 prior to your visit. If there are access requirements you think are worth mentioning, please book your tickets using ticketmaster and call this number as soon as you can. Bilnd or vision impaired visitors can also call this line beforehand to book braille or large print material.

The O2 Academy Birmingham grants one companion ticket per customer so that they can assist you throughout your visit. This ticket is completely free of charge and please note that you will have to prove your eligibility.

The O2 Academy Birmingham also accepts the Access Card, which means that your details will be on the system and you will not have to fill out anymore forms. You can find online booking forms available on the The O2 Academy Bristol website.

There are wheelchair spaces available at the O2 Academy Birmingham however we recommend that you book them far in advance as they are sold on a first come, first served basis. There are also viewing areas and platforms for access customers but please be aware that these are just for the customer and one companion, not a large group.

Guide and assistance dogs are welcome in the auditorium but please let us know when you book so that the O2 Academy Birmingham can think about possible locations the dogs can stay throughout the show.

The O2 Academy Birmingham has several bars and cloakrooms available. However, there is limited space in the Cloakroom so try not to bring very large items.

Depending on the event, age restrictions vary. However, there are a few general rules to follow:

The O2 Academy Birmingham first opened its doors in 2000 and was previously located in the Dale End venue. The site of the Dale End venue dates back to 1964, and it was first known as the Top Rank Ballroom and was then renamed the Hummingbird during the 1980s and 1990s. It was refurbished during the 1990s and then, in 2000, the venue reopened as the Birmingham Academy, then rebranded as the Carling Academy Birmingham, along with all the other venues which belonged to the Academy Music Group.

Following the O2’s announcement that they had purchased the naming rights for all Live Nation’s AMG venues, the venue was renamed the O2 Academy Birmingham, as it is still called today. The O2 Academy Birmingham moved location to the old site of the Dome II Nightclub in Horsefair, Bristol Street. The homegrown indie band the Editors hosted the opening night for this site and it has since been attracting huge names in live entertainment.